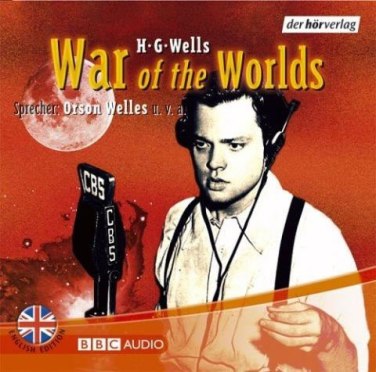 A slightly edited version of this article was originally published in the October, 1992 issue of Monitoring Times magazine.

Remember when the Martians invaded? Of course! – It was back in Grandpa’s time. We hear about it every Halloween. On October 30, 1938, Orson Wells presented a dramatization of War of the Worlds on the CBS network. Wells’ Martians landed near Princeton, NJ and proceeded to wreck havoc on the surrounding countryside. Well, maybe there weren’t really any Martians, but the broadcast certainly created havoc across the country. Millions of Americans tuned in after the opening credits and thought the invasion was for real. As police stations were swamped with phonecalls, many city-dwelling Americans jumped in the family car and took off for the safety of the country. Others went off in search of a priest to give a final confession. At New York City’s naval base, shore leaves were canceled and sailors were called back to their ships. In short, panic seized the entire nation.

How could Grandpa have been so dense as to actually believe that Martians really had landed? And now every year we wave it about for the world to see – Look, everyone at how we got fooled in 1938! It’s sort of a blemish on the national IQ. Well, fortunately we’re not the only ones to get bowled over by imaginary Martians. Just eleven years later it happened again, south of the equator, in Quito, Ecuador. The Ecuadorians got taken in just as bad as grandpa did, but their reaction was, well, a little bit stronger.

Nestled at the foot of Mount Pichincha, in a fertile Andean valley, Quito has always been as peaceful as a city could be. When the 1940s came along, Quito may have lagged behind the rest of the world in some things, but communications was not one of them. In downtown Quito, next door to the Ministry of Communication, was the three-story Comercio building. This was headquarters for Quito’s premier newspaper, El Comercio, which was respected throughout Latin America. Also in the same building was Radio Quito, owned by the newspaper, and the most popular radio station in the city.

In February, 1949, Leonardo Paez, the art (program) director of Radio Quito and Eduardo Alcaraz, the station’s dramatic director, were looking for something new and exciting to do on the air. Something that would really draw attention to Radio Quito. They had heard of Orson Wells’ famous War of the Worlds program, and that seemed to have just the level of excitement they needed. A script was drawn up and actors and sound effects were arranged for. Paez and Alcaraz saw no need to tell station management about their plans. It was just another drama production. Finally, on Saturday, February 12, 1949, everything was ready to go.

As usual, listeners in Quito and surrounding towns tuned in to Radio Quito’s evening newscast, which was followed by the nightly music program. Suddenly, an announcer broke in mid-song, «Here is an urgent piece of late news!» He then gave a long and frightening description of how Martians had landed twenty miles south of the city, near Latacunga. Latacunga had already been destroyed and the aliens were approaching Quito in the shape of a cloud. A few minutes later came another announcement, «The air base of Mariscal Sucre has been taken by the enemy and it is being destroyed. There are many dead and wounded. It’s being wiped out!»

The broadcast now took on an eery reality, as different actors stepped up to the microphone, some chosen for their ability to sound like well-known public officials. First, the ‘Minister of the Interior’ arrived, and urged citizens to stay calm to help «organize the defense and evacuation of the city». Next, it was the ‘mayor’ of Quito’s turn: «People of Quito, let us defend our city. Our women and children must go out into the surrounding heights to leave the men free for action and combat.» Then a priest begged for mercy from God as a recording of Quito church bells ringing in alarm was played in the background. The prayer was interrupted for a telephoned report from an announcer at the top of Quito’s tallest building. He described a monster surrounded by fire and smoke coming towards the city. More reports were telephoned in from residents of the nearby village of Cotocallao, which was now under attack.

Panic in the Streets

By this point, the population of Quito was in panic. The city’s streets filled as thousands fled their homes, many wearing their pajamas. The noise in the streets was the first inkling Radio Quito had of what they had done. An announcer came on and revealed that the broadcast was entirely fictional. Station staff members, many trusted voices, «frantically» pleaded for calm in the city.

Radio Quito’s appeals did nothing to calm the mobs in the street. In fact, hearing that the whole thing was a hoax angered people even more. From all directions, thousands converged on the El Comercio building and began stoning it. About 100 people were in the building when the riot began. Most were able to escape the mob through a back door, but some were forced to flee to the third floor. The police and army were called to come put down the riot, but they were already busy. They were on their way to Cotocallao to battle the Martians.

More rioters arrived. Some brought gasoline, others had crumpled copies of the El Comercio newspaper. Gasoline was used to fuel the fire as dozens of burning El Comercio‘s were thrown at the building. Soon, the building was engulfed in a mass of flames which began spreading to nearby buildings. Several dozen people were still trapped on the third floor. Some leapt from windows to escape the flames. Others tried forming a human chain to climb down, but the chain broke and most crashed to the pavement.

Finally, the police and army arrived, but it was only with tanks and massive doses of tear gas that the crowds cleared, making room for the fire trucks. The fire was put out before it caused extensive damage to nearby buildings, but it was too late for the El Comercio building. Only the front was left standing. The presses, radio equipment, and the newspaper and radio station files were destroyed, leaving $350,000 in damage, an astronomical sum in 1949. More tragic, was the human cost. Twenty people died in the fire, or trying to escape it. Fifteen more were injured.

The next day, the staffs of El Comercio and Radio Quito began picking up the pieces, except for Paez and Alcaraz, who were indicted. Other Quito and Guayaquil newspapers offered their presses so that the newspaper could continue printing. Gradually, the paper and the radio station were rebuilt, and they regained their positions as the most respected media in Quito.

Apparently neither wants to remember the most memorable event in their past, however. In a 1980 article on the 40th anniversary of Radio Quito, El Comercio didn’t include a single sentence about the Martian broadcast.

Today, Radio Quito is a not-to-difficult catch on 4920 kHz in the sixty meter band. It can be heard most evenings until 0400 sign- off, and mornings after 1000 sign-on. Programming is mainly news and sports, with occasional radio dramas. But, don’t expect to hear any science fiction. Radio Quito stopped doing that sort of thing a long time ago.